As the tentative March 24th session deadline drew closer, there was an urgency to “get done and go home”. This reckless pace of Pelosi-style “pass-it-to-find-out what’s-in-it” style of legislating is counter productive to what Idaho really needs and justification for a major overhaul of the committee system.

Idahoans deserve quality legislation. Because of this, a group of liberty legislators took the initiative to actually have a few bills read out loud for the entire House. This helped legislators understand the bills and slow the pace down to a more manageable level. These readings caused quite the stir in the orchestrated circus process that has become the norm for the last few weeks and hours of session.

Legislators are elected to review, debate and make sure they understand the bills before the final vote; not act like they are in a legislative sprint to the finish.

When lunch breaks and spring break vacations become more important than the impact of the laws we pass and their ultimate effects on the lives of Idahoans, we have lost our way. Too many times on the House floor I heard the phrase “we want to get out of here by Friday” To pass legislation in this fashion is reckless and will most certainly have negative consequences for hard working Idaho families, their dollars and freedoms.

A few examples of fast tracked bills during the 2017 session that troubled some legislators included:

These bills, like all bills, deserve full consideration and legislators should be able to vote on them after thorough review; not screamed at or brow beaten for actually wanting to follow the constitution and have the bill read out loud prior to voting on it. Behind the scenes scheming and shenanigans by leadership often stops the process or circumvents normal procedure. Many times our legislators don’t even know what is going on until the vote is over. 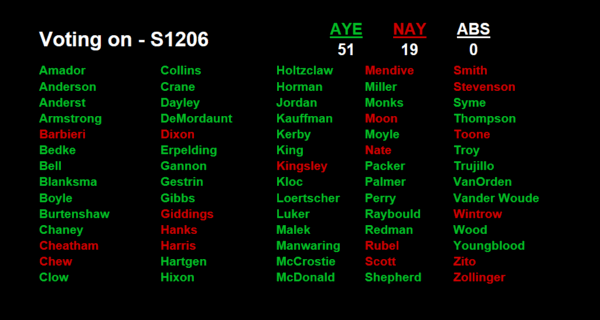 Above is a photo of yesterday’s vote count on a transportation bill passing the buck to future generations. Idaho legislators decided it was more important to spend the $140 million surplus of your tax money on new programs and expansion of agencies’ staff and budgets instead of the roads. It was easier to borrow an additional $300 million from the federal government (with strings attached) and pass that buck down the road to future generations.

Only 7 states fully tax groceries, and Idaho is one of them. The governor has a bill, passed by both the House and Senate, to repeal the tax on groceries, but may veto it. Please let him know where you stand on this issue: 208-334-2100 or governor@gov.idaho.gov.

That is all for now, stay tuned for how it all ends!